The sheriff said people are still reported missing, and a more organized search will be conducted in the morning.
“We’ve done everything we feel like we can do this evening. The area is just very, very hazardous to put anybody in to at this point in time – debris everywhere and it’s just…just some mass damage to structures and residences in the area,” Jones said.

He didn’t give any details about the locations or exact circumstances of the deaths.
Lee County Coroner Bill Harris said the victims range in age from children to older adults.
Family members on the scene identified one of the victims as an 8-year-old.

It’s unclear how many people are injured. Sunday afternoon, East Alabama Medical Center said it had received more than 40 patients as a result of the tornado and more were expected. Some of the patients were sent to surrounding hospitals. 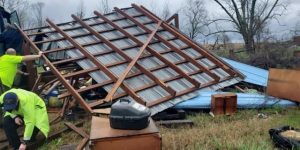 The coroner said Sunday night there were still areas that authorities hadn’t reached. He added that injured victims were having to be transported by trucks out of some of the damaged areas because ambulances couldn’t get through the debris.
He said they were still working to identify the victims who had been recovered and notify families. Coroners from around the state were coming to assist.

“This is a day of destruction for Lee County. We’ve never had a mass fatality situation, that I can remember, like this in my lifetime,” Harris said.

The National Weather Service in Birmingham says the first tornado that impacted Lee County Sunday afternoon was at least an EF-3 and at least half a mile wide. The NWS will be sending survey teams to do more detailed assessments in Autauga, Macon, Lee, Barbour and Butler counties Monday.