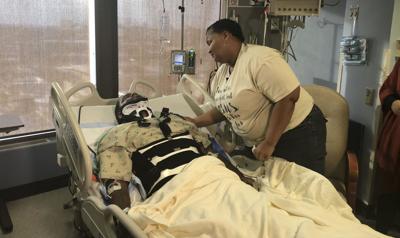 ST. CHARLES, MO – The Amazon delivery driver who was shot in the back is suing the alleged gunman. An attorney for the victim is asking for $250 million in punitive damages.
There are now three cases stemming from the attack in the Target parking lot on March 5: a criminal case, civil case, and a workers’ compensation case.
According to a civil lawsuit filed by attorney Mark Cantor and the legal team at Cantor Injury Law, on the day of the attack 21-year-old Jaylen Walker was working as a delivery driver for an Amazon subcontractor. While assisting a co-worker with deliveries, Walker parked in a handicap space in the parking lot of the Target on Mexico Road in St. Charles.
Authorities say Larry Thomlison, 65, confronted Walker over the parking spot. Thomlison had his cellphone in hand to document the confrontation. Walker told Thomlison he would move his truck but the situation escalated.
“Mr. Thomlison continued to film him, pushed him, then punched my client in the head,” Cantor said.
The lawsuit states Walker pushed Thomlison to the ground and noticed a handgun holstered to Thomlison’s hip. As Walker tried to run away, Thomlison shot him in the back.
Authorities say Walker suffered spinal cord damage and is paralyzed from the abdomen down.
The St. Charles County prosecutor charged Thomlison with assault and armed criminal action. The civil lawsuit accuses Thomlison of negligence, battery, and assault, and seeks money for Walker.
Ultimately, a jury will decide how much, if any, Walker will get.
“We’re seeking as much as a jury will award,” said Cantor. “We’ll probably ask for $250 million or more.”
Cantor said he has not seen surveillance footage from the scene, including nearby businesses, but his office has requested the footage from authorities.
Cantor’s office has also filed a workers’ compensation claim on Walker’s behalf.
“It will pay two-thirds of your average weekly wage for as long as you’re disabled, which in this case may be forever,” he said.
By Missouri law, if Walker wins the civil suit, Cantor says Walker will have to repay money collected through the workers’ compensation claim.
Cantor said his team is still working to determine what insurance coverage and assets Thomlison has. It could take years before a settlement is reached.