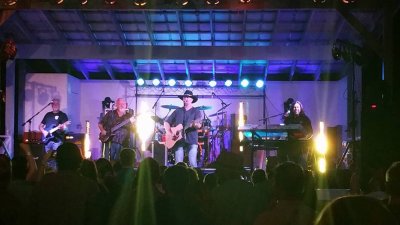 SPRINGFIELD, Ill – Illinois has canceled a state fair appearance by the Southern rock group Confederate Railroad because of its use of the Confederate flag.
A spokeswoman for Gov. J.B. Pritzker, Emily Bittner, said Tuesday that the administration prohibits using state resources “to promote symbols of racism.”
The group was scheduled to play the DuQuoin State Fair Aug. 27.
The band’s logo features a steam locomotive flying Confederate flags. The flag has been criticized as a racist emblem of slavery and segregation, but supporters say it represents history.
Frontman Danny Shirley says in a statement that the band is disappointed, but thanked their fans.
Confederate Railroad was to appear with Shenandoah and Restless Heart. Shenandoah says it will still play but that “this ‘political correctness’ has to stop. It’s tearing our country apart.”