BARSTOW,CA – Science Channel star “Mad Mike” Hughes died during an attempt to launch his homemade rocket Saturday.
“Our thoughts and prayers go out to Mike Hughes’ family and friends during this difficult time. It was always his dream to do this launch, and Science Channel was there to chronicle his journey,” the Science Channel said in a statement.
Hughes was scheduled to launch his homemade rocket for a new Science Channel series called “Homemade Astronauts,” according to the Discovery Channel website.
Hughes and Waldo Stakes built a steam-powered rocket with the intent of launching Hughes 5,000 feet to into the air, the website said.
Hughes eventually hoped to develop a rocket that would launch him 62 miles in the air to where the Earth’s atmosphere meets outer space, according to the Discovery Channel. Mad Mike’s representative Darren Shuster told TMZ, “When God made Mike he broke the mold. The man was the real deal and lived to push the edge. He wouldn’t have gone out any other way! RIP.” 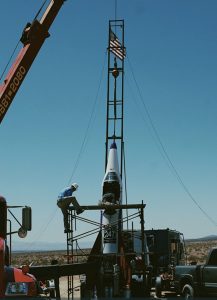